Inn-to-inn hiking on the Via Alpina through the Glarus and Uri Alps. Liechtenstein to Grindelwald

Arrive in Bad Ragaz, a world-famous spa resort on the eastern Switzerland Rhine border. After checking into our castle hotel we take an afternoon excursion across the Rhine and into the mountainside Principality of Liechtenstein. We’ll take a short warm-up walk up to Vaduz Castle, the palace and residence of the Liechtenstein’s ruling family.  Return to Bad Ragaz for an orientation and welcome dinner. (D)

After a quick ascent to high alpine pastures our route follows an undulating course through woods and meadows with relaxing views of the Weisstannental and its many waterfalls. We pass a dozen or more of these streams and rivulets cascading down the hillside. The Weisstannental is canton St. Gallen’s longest valley and we arrive at our hotel in the peaceful village of Weisstannen where local trout is a popular menu item. (BSD)

As we continue ascending the Weisstannental it narrows and becomes more rugged before passing above a giant chasm leading to the high meadows at Fooalp. The crossing of our first pass, the Foopass (pronounced FOE-pass) takes us to 7300 feet elevation and will give you a good taste for the more challenging alpine passes ahead. The decent to Elm delivers more stunning scenery, with many large waterfalls streaking the hillsides. Elm is in the heart of the Sardona Techtonic Arena, a UNESCO World Heritage Site and geologic showpiece. A funicular speeds our ascent to the car-free mountain resort of Braunwald, overlooking the jagged peaks of the Glarus Alps, where we spend the evening basking in the mountain views and starlit sky. (BSD)

After a rather strenuous day, you’ll enjoy the more level and relaxing contour of our route today as we take a high path above the valley leading to Urnerboden, Switzerland’s largest Alp. The mountain views are still astounding and so different from other peaks in the Alp—reminiscent of the Dolomites. We’ll stock up on cheese from the large dairy in Urnerboden. From our hotel in the heart of the village we gaze down the valley to the pastures below are lulled by the clanging of cowbells. (BSD)

The Klausenpass is an historic route that has been used for centuries as a trade route and to connect the hamlets and farms that dot both sides of the pass. Several great waterfalls along the route grab our attention. As we descend the valley into Altdorf we arrive in the old town of Bürglen, home of William Tell. The 16th-century chapel, built on the site of his house, and the Tell Museum draw us into the life and times of this Swiss hero. We follow the Tell interpretive trail into Altdorf and the monument depicting Tell with crossbow and pierced apple in hand. (BSD)

(Note: These distances and elevations are based on walking the entire way. There is regular bus service over the Klausenpass from Urnerboden to Altdorf which we often use to shorten and soften the route, based on guest preferences)

We cross the River Reuss which descends from the historic Gotthard Pass to start our day’s hike by taking a small cable car from mountainside village of Attinghausen to Brüsti, just above treeline. The airy route to the Surenenpass ascends below the steep cliffs with the peaks of the Brunnistock and Blackenstock towering overhead. A large permanent snowfield makes for an efficient and speedy ascent route to the pass. Coming down views of Mt Titlis dominate the panorama. You’ll enjoy lunch at one of the small hamlets and mountain restaurants along the way before arriving in the delightful mountain resort of Engelberg where we stay two nights. (BSD).

(Note: These distances and elevations are based on taking a cable car to Brüsti for a high start. The is overall distance and descent can be reduced by taking a cable car down from Fürenalp and a bus into Engelberg at day’s end, based on guest preferences)

With so much to do in the mountain Engelberg mountain resort, it’s hard to call this a rest day. You’ll enjoy one of the great mountain excursions in the Alps as we ascend Mt Titlis, one of the giants of the Uri Alps, on the world’s first rotating cable car. We’ll visit the 12th century monastery, which houses a demonstration cheese dairy, and the nearby baroque Abbey. You’ll still have time to explore Engelberg with its pedestrian town center. (BSD)

Ascending above Engelberg we enter an expanse of high alpine lakes and grassy meadows. We pass the Trübsee and over Jochpass to the Engstlensee. This is the realm of the marmot, and hosts an amazing diversity of wildflowers. We have options on the ascent, and you can make today a strenuous stretch or take it at a more leisurely pace. Either way, we arrive at the traditional Alpine hamlet of Engstlenalp on the Engstlensee where we stay at the Hotel Engstlenalp, a tradition mountain hotel dating to the 1860s. (BSD)

(Note: These distances and elevations are based on walking the entire way. There are two cable cars which we often use to shorten the distance by 3.7 miles and eliminate the ascent entirely, based on guest preferences)

Departing Engstlenalp we soon arrive at the equally charming Alpine hamlet of Tannalp with its tiny church and dozens of friendly goats. We skirt the Tannensee to ascend the Erzegg/Planplatten Ridge, a highlight of the Via Alpina and one of the great ridge walks in the Alps. The highest peaks of the Bernese Alps appear in front of you with the bulky massif of the Wetterhorn dominating the mountainscape. We descend the ridge into the popular town of Meiringen, where meringues were invented. (BSD)

(Note: These distances and elevations are based on walking the entire way. There is a cable car on the descent from Planplatten to Meiringen which can be used to shorten the route by 6 miles and reduce descent by 4900 feet)

Meiringen sits at the base of four strategic and historic passes and lies on the Aare River before it flows into the Brienzersee. Meiringen has long been a magnet for international travelers like Sir Arthur Conan Doyle who came here and wrote of Sherlock Holmes’ death at Reichenbach Falls. We’ll ascend the falls by funicular before continuing up the gorgeous Rosenlaui Valley. We ascend a thundering gorge which drains the Rosenlaui Glacier, then cross the final pass of our trek, the famed Grosse Scheidegg which leads us to our flower-decked hotel with views to the North Face of the Eiger. (BSD)

(Note: These distances and elevations are based on taking the funicular to ascend Reichenbach Falls, the walking the rest of the way to Grindelwald. There is regular bus service over the Grosse Scheidegg from Meiringen to Grindelwald which can be easily used to shorten and soften the route)

We take the classic mountain railway excursion which tunnels through the Eiger to arrive at the Jungfraujoch, the highest railway station in Europe, and overlooking the Great Aletsch Glacier, the longest in the Alps. In the afternoon we return to Zurich for our farewell dinner and final night.

After breakfast plan your departure or onward travel. 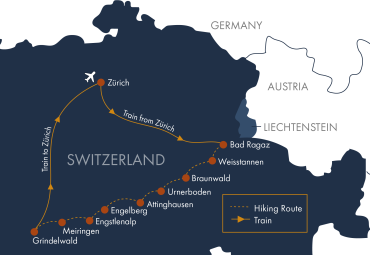 Alpenwild trips are designed for people who are energetic, active, and filled with a spirit of adventure. We rate this trip as strenuous. You should be an experienced hiker in good physical condition. You should be capable of walking -7-8 hours per day on good trails with some steep ascents and descents, averaging 2500-3000 vertical feet per day at an elevation up to 8500 feet above sea level. Sure-footedness is important and vertigo may impact your ability to do this tour.  Please note that on Day 3 there is an elevation gain of 3293 vertical feet, and a descent of 4088 feet, for which there is no lift or public transportation to reduce the ascent or descent.