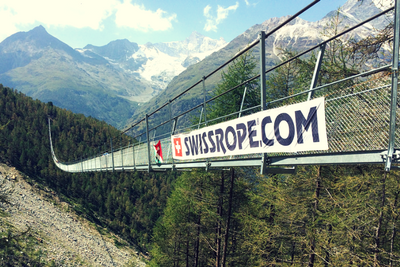 As the train ascends the Mattertal from Visp to Zermatt, the world's longest pedestrian suspension bridge comes into view high on the mountainside above Randa. It looks completely inaccessible, but with a little planning and preparation, any hiker can experience the thrill of crossing this engineering and scenic wonder in the Swiss Alps. Here's what you need to know.

Why the new suspension bridge?

The bridge, officially named the Charles Kuonen Suspension Bridge, after the project’s primary sponsor, Charles Kuonen, a local psychologist and winery owner, is popularly known as the Europaweg Skywalk or just the Randa Suspension Bridge. It replaces a much shorter and lower nearby bridge which was destroyed by rockfall in 2010, just two months after its opening. Since the closure of the old bridge, hikers on the Europaweg, the scenic hiking route between Grächen and Zermatt in the Pennine Alps, were forced to make a three- to four-hour detour. The new bridge now gracefully spans the Grabengufer, a wide rock-strewn ravine below the Grabenhorn and just beyond the Europahütte, an overnight stop on the Europaweg.

About the new suspension bridge

The Europaweg Skywalk is 1621 feet (494 meters) long and set at a height of 7218 feet above sea level. At its highest point, the bridge is 282 feet (86 meters) above the ground—about the height of a 28-story building. It is just 25.6 inches (65 centimeters) wide, so hikers need to walk across the bridge in single file, and turn sideways to let oncoming hikers pass by. The bridge is steel construction with a grated steel foot bed, which allows hikers to look down into the chasm below, if they dare. The cable tension is rated at 440 kilonewtons, and allows up to 250 hikers to safely cross the bridge at the same time. The diameter of the cables is 53mm and the weight of the cables is 8 tons. The bridge was constructed by SwissRope, a Swiss bridge and cableway technology company, using "assembly sleds" in just 10 weeks and at a cost of over $775,000. The bridge opened on July 29, 2017.

Europaweg hikers traveling south from Grächen to Zermatt are treated to views of the Matterhorn and other major peaks of the Pennine Alps. While hiking in the opposite direction yields a panorama of the Bernese Alps. Along the way, hikers will be overlooking the Mattertal, the deepest-cut valley in Switzerland.

How to hike the Europaweg Skywalk

The Europaweg Skywalk suspension bridge is most easily done as a dayhike from Zermatt. Take the train from Zermatt to Randa. Then stop by the Tourism Information office across the street from the Randa train station. The Tourist Office will provide you with a map and instructions for the two-hour ascent to the south end of the bridge.

Most hikers will choose the steep but well-graded trail on the south side of the Dorfbach. The trail ascends through Höüschbiel at 2060 meters elevation before arriving at the bridge. Plan on an ascent of about two hours.

The bridge crossing only takes about ten minutes, but you’ll want to allow more time for photos and to take in the views in all directions. There are even picnic tables below the bridge on the north end. If you have a little extra time, continue northbound on the trail up to the Europahütte for lunch, a one-way hike of about 30 minutes.

The steep downhill return back to Randa along the north side of the Grabengufer takes about 75 minutes, and passes through Lärchberg at 1862 meters elevation. The overall ascent and descent from Randa to the bridge is 650 meters (2132 feet) of elevation gain. 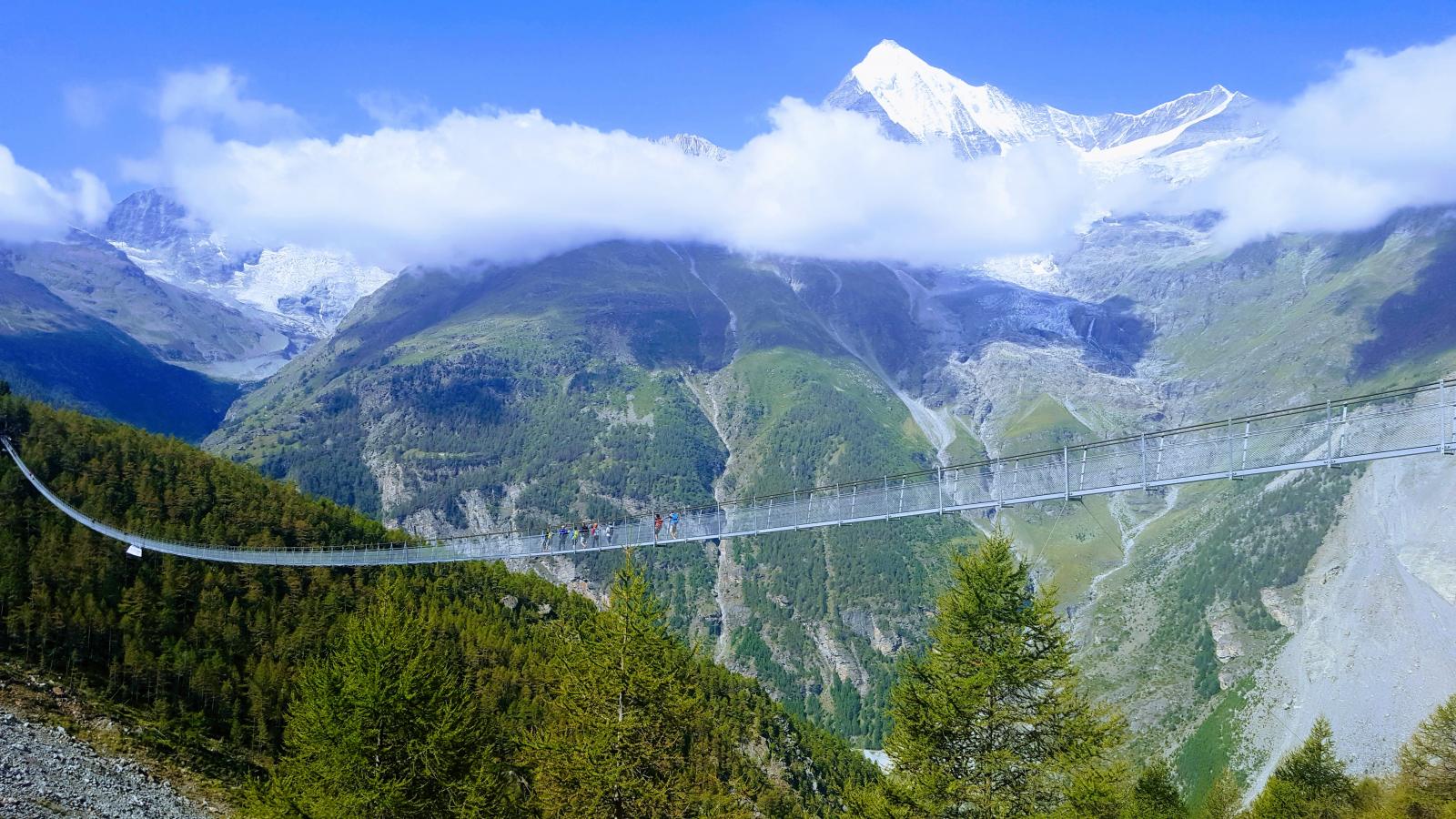 There are warnings on the bridge to beware of rockfall, but that is highly unlikely given the height and span of the new bridge. Hikers are also advised to avoid the bridge when there is a likelihood of lightning in the area. The local tourist authority says that the bridge is for "hikers with no fear of heights."

Alpenwild guides and guest crossed the bridge on August 10, 2017, shortly after its opening. Crossing the world’s longest pedestrian-only suspension bridge is a great hike and it was a thrilling experience for all of the hikers. In the dense fog, it was impossible to see from one end of the bridge to the other. But soon there was a clearing, and the entire span of the bridge became visible. In clear weather, you'll have views of the Weisshorn and its glaciers to the west.

The Europaweg Skywalk suspension bridge is a featured hike on Alpenwild’s Eiger to Matterhorn trek, and can be added as an optional hike on the Chamonix-Zermatt Haute Route and other guided and self-guided hiking trips in Zermatt.

For other route details and a map of the circular route to the bridge from Randa, see Circular Hike to the Suspension Bridge in Randa from Zermatt Tourism. 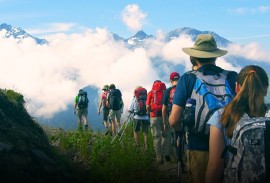 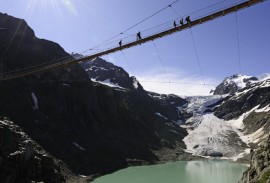 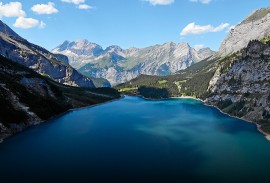 Eiger to the Matterhorn 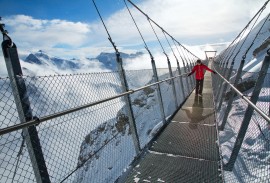