How Melted Cheese Conquered the World

On a trip to Switzerland you can't help but notice that this Alpine nation is a melting pot of cultures, so it’s certainly fitting that it’s most widely recognized and best known dish--fondue--is a melting pot of flavors and aromas. 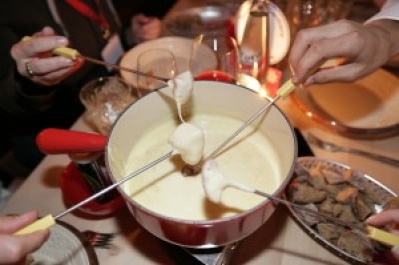 Fondue, which comes from the French “fondre”, meaning “to melt,” had its origins in 18th century Switzerland as a means for farm families to stretch their limited resources during the winter months. With some remaining cheese, some stale bread, and a dash of wine the family could gather around the hearth. In Alpine farm villages bread was baked only occasionally so whatever bread was on hand was usually stale. By dipping the bread in the melted cheese, the bread was softened and became delectable. From these simple beginnings, fondue became a Swiss winter tradition.

The first written recipes for fondue appear in 18th century cookbooks published in France and Belgium, however they call for Gruyère, a decidedly Swiss cheese, so the Swiss rightfully deserved credit as the originators of fondue. Even though fondue may have had rural roots, its place at the Swiss table wasn't limited to the farmhouse and the peasant class; rather, it was more frequently enjoyed by people of means. The widespread popularization of fondue was part of a 1930s campaign by the Swiss Cheese Union (Schweizerische Käseunion) to increase cheese consumption in Switzerland.

After World War II and the end of rationing, the Swiss Cheese Union resumed its successful campaign, now promoting fondue as the Swiss national dish and as a symbol of Swiss unity and national identity. Fondue even made its way into the cookbooks of the Swiss military. But fondue was unknown in America, the world's largest cheese market. The introduction of fondue to America occurred in 1964 at the New York World's Fair when fondue was featured at the Swiss Pavilion's Alpine restaurant. 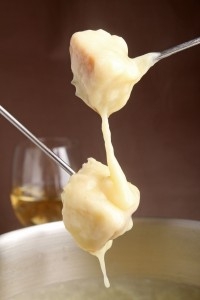 Even today, Swiss consider fondue as a winter meal--a one-pot meal of comfort food to be enjoyed family style. It’s generally just the tourists that consume fondue in summer months. Fondue is traditionally made and served in an earthenware pot known as a caquelon. This wide, shallow pot is favored because it heats evenly and retains heat so the meal can be enjoyed for a longer period of time. Diners skewer cubed chunks of bread, each about one inch square, into the bubbling cheese and swirl for a few seconds to coat the bread and allow it to soak up some of the cheese--though at the same time being careful not to soak so long as to disintegrate the bread. Losing your bread in the pot is bad form and the Swiss will half-jokingly assign a penalty to it like washing the dishes. Rather than mopping up the last bit of melted cheese from the bottom of the pot, let the flame continue to cook the cheese on the bottom of the pot so that a dark crust forms. This crust is called the religieuse and when chipped away from the pan and served up at the end of the meal it’s considered a delicacy.

Fondue is enjoyed and found in homes and at restaurants throughout Switzerland, though it is most common in traditional or rural areas in both French and German speaking regions. Fondue is rarely served in elegant restaurants, since the aroma wafting throughout the establishment would overpower the more subtle flavors of other diners’ food. 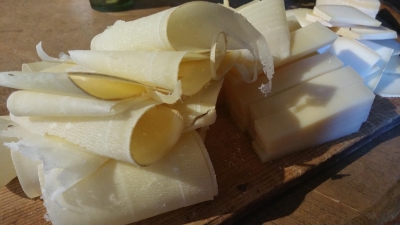 There is no standard recipe, nor is there even a single type of cheese that’s universally favored for Swiss cheese fondue. One popular rendition is an equal blend of Gruyère and Vacherin Fribougeois, known as "moitiè-moitiè" or "half-half." But if you’re in eastern Switzerland it’s just as likely to be Gruyère mixed with an aromatic Appenzeller. In Valais, more often than not you’ll enjoy a blend of Gruyère and Raclette, while in canton Bern, Emmentaler seems to most commonly appear. All are great melting cheese and exude a wonderful aroma as they melt.

Though cheese, wine, and garlic are the basic ingredients in Swiss fondue, you’ll also find other add-ins such as mountain herbs, paprika, cayenne, nutmeg, mustard, and occasionally tomato coulis. The bread is always sturdy and can be either white or brown, cut into bite-sized chunks for dipping. Accompaniments often include potatoes, cornichon, and pickled pearl onions. Accompanying beverages are white wine, tea, and occasionally a glass of kirsch. Although locals consider fondue a main course, you'll be able to enjoy it as an entree or an appetizer as you dine in the Swiss Alps. A fondue night is a particularly popular feature of Alpenwild's Discover Swiss Cuisine -French Inspired. 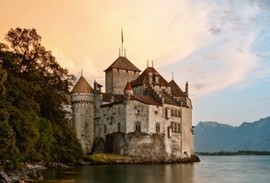 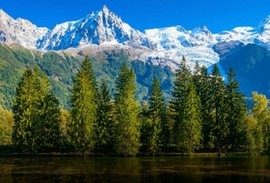 Best of the French Alps 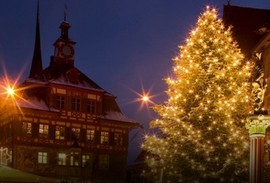 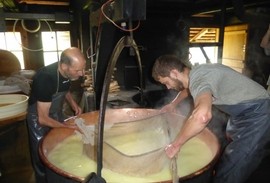